The Thing Is: (Self Titled Album) 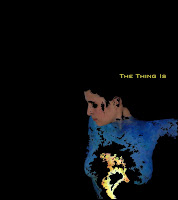 We've been talking a lot lately about jazz and its fusions with other genres. Though, when we look at jazz, we see a genre that bares its roots in the American musical tradition. With the exception of Latin music, it seems to be a rarity when we listen to jazz that has been combined with music from other cultures. Most notably, contemporary bassist Avishai Cohen has been at the forefront of this musical style. However, there is currently a Toronto based group who has been making a lot of noise with their own culturally diverse compositions. The Thing Is was formed in 2006 by Tova Kardonne, a vocalist and composer who uses this ensemble as an outlet for her music. Her compositions have been acclaimed for combining jazz with the Jewish, Balkan, and South african musical styles, respectively. The group has also attracted guest appearances from the likes of Ted Quinlan, Dave Restivo, and Bill McBirnie. Most recently, The Thing Is released their much anticipated self-titled debut album, who's personnel include Kardonne on the vocals, Graham Campbell on the guitars, Dave Atkinson on the piano, Amy Medvick on the flute, Mike Wark on the saxophones, Christian Overton on the trombone, Trevor Falls on the drums, and Chris Kettlewell on the bass. Some songs to note on the album are "Moving On", "Wonder", and "Spending Time". Furthermore, Kardonne and her octet released an absolutely fantastic debut album. Kardonne is definitely one of those musicians who we should all be watching out for as she takes Canada and the world by storm with her original and incomparable musical style. Preview some of the album via their Myspace.

The Thing Is: Myspace

Posted by The Canadian Jazz Review at 14:23

The Canadian Jazz Review
About Us: The Canadian Jazz Review is a team of jazz lovers, just like you, and we are here to highlight Canadian jazz. There are so many Canadian jazz albums out there that are amazing, however are never even talked about. On this site, we feature reviews of Canadian jazz albums, both known and unknown, and our goal is to turn you on to music you may never have even stumbled upon. Not only do we review the legends, however we put a strong emphasis on the Canadian jazz students, and up-and-comers. Contact Us: If you have an album that needs reviewing, would like to join our team, or have any other inquiries, you can contact us at: contact@canadianjazzreview.ca Facebook: http://www.facebook.com/canadianjazzreview